Poodles come in three sizes—the Standard (over 15 inches at the shoulder but most are from 22- to 27-inches in height), the Miniature (over 10 inches but not over 15 inches), and the Toy (under 10 inches). The breed standard for the Poodle is the same for all three varieties with the exception of height.

The original Poodles were water dogs used for retrieving and their conformation and the texture and pattern of their coats to this day reflect the purposes for which they were bred. Miniatures and Toys have been bred down from the larger Poodles and they exhibit the same general characteristics. The Poodle is an active, intelligent, ruggedly-built dog which is at the same time elegant and refined. Well-bred Poodles in all three varieties now have steady, calm nerves, hardy constitutions and they can be easily trained. A Poodle is a “person” and he expects to be treated as one. Each one is a character and for that reason they make wonderful companions.

A Poodle should be a member of the family. Prospective owners of Poodles should be equipped to provide a fenced-in area in which the Poodle can exercise or be prepared to walk the Poodle regularly on a leash. Poodles permitted to roam are likely to be stolen or killed. Poodles require regular clipping and grooming; a dexterous owner can readily learn how to groom his own dog or he can take the Poodle to a professional grooming shop. Poodles are not finicky eaters (unless made so by indulgent owners;) they thrive on simple, prepared dog foods.

Excerpted from the Poodle Club of America Web site.

Chances are, the first image that comes to mind when you hear the word “poodle” is one of it being French and in that silly, poofy haircut. Have you ever wondered what that hair cut is all about? Although the cut has been modified to appear more elegant today, the placement of each section of hair provided critical protection to the poodle from the cold waters while retrieving water foul.
The “puffs” of hair found at the hips and ankles are positioned over joints in the leg. They are there to keep the poodles joints from becoming too cold and stiff. The hair that covers the chest was left thick to protect its heart and lungs. That hair continues up the neck, again to keep the neck joints warm and fluid to capture water foul with ease. The “puff” on the tail was used as a flag for hunters to easily see their poodles. They were often tied with ribbon.

The origin of the poodle is not completely clear.
Images resembling poodles appear in Roman and Egyptian carvings. Paintings depicting people with their poodles appear throughout history. But no definitive history exists.
While it is true that French courtesans popularized the breed internationally, the origin of the Poodle has been traced back to Russia and Germany with some references dated as early as 15 A.D. We do know that poodles were prized and unrivaled waterfowl retrievers in both Russia and Germany, and that the name “poodle” comes from the German word “pudel.”
The first AKC registered poodle appeared in 1890. By the late 50s Poodles had become the most popular breed and maintained this status for over 20 years. 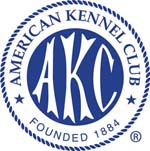 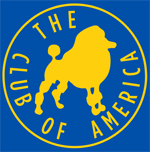